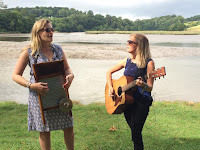 Alex and Becca perform the perfect blend of country and blues music.
Both established solo singers in their own right and decided to collaborate for a duo project after being asked to tour with Jethro Tull's Martin Barre in the winter of 2015.
So far they have toured the UK and Europe as a duo and played extensively in other projects including their band The Trees.
Buy tickets for all of our gigs directly from us!