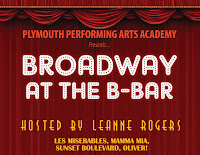 
Plymouth Performing Arts Academy are proud to present 'Broadway at the B-Bar',  an evening of Musical Theatre, showcasing some of the most exciting and freshest talent in the area. The evening will be hosted by Leanne Rogers, who has appeared in numerous productions in the West End and around the world, including leading roles in Les Miserables, Mamma Mia!, Oliver! and Sunset Boulevard, appearing alongside Alfie Boe, Matt Lucas and Joe McFadden to name but a few. Leanne will be accompanied by the musical director Chris Hamilton, and members of Plymouth Performing Arts Academy.

Come on a musical theatre journey from the West End to 'Broadway at the B-Bar'!!
Buy tickets for all of our gigs directly from us!